Home Martial Arts, 黄氏太极拳 The mystery of Tai-ji movement : 揽雀尾(grasping the tail of a charging bird) 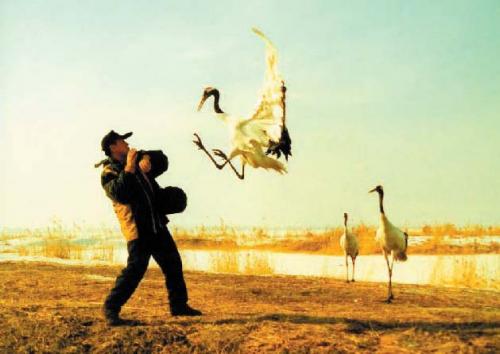 Imagine that you are attacked by an angry bird,  say a crane. It charges at you by its sharp beak. What would you do ?

If I were you, I would use my right hand to intercept its long neck and deflect it a few inches to the right away from my body (don`t forget not to lose contact , this is called Tai-ji sticky-hand 《太极黐手〉）; then screw/slide  in with circular motion  along its body until  reaching its tail and grip it ! Then the crane could not advance further any more. That means you had used the skill : COILING (缠丝手） to  NEUTRALIZE （化解） the attack ! This movement is the genuine 揽雀尾！

Likewise if you are attacked by a hard punch, you would use the same technique as follows : use one hand to intercept his wrist (which symbolizes the neck of the bird) by deflecting a few inches away from your body then screw/slide in without losing contact along his fore-hand until reaching his elbow (which symbolizes the tail of the bird) and grasp it ( please refer to the video in my website wonghohnkhew.com @ Youtube) .

The mystery of 揽雀尾 is that : you could neutralize the 1st attack and approach your opponent as close as in body-contact such that his 2nd attack  with his another hand or leg  could not reach you due to out of position or body unbalanced !  Since you are now so close to his body then you could counter attack by one of the 8 Tai-ji combat techniques : intercept/deflect（棚），roll-off/dragging (捋），press（挤）, push (按），pluck（採）, split/spread (挒），elbow（肘）, lean (靠）！How do  you practice the Tai-ji coiling at your backyard ?  If you have watched Jet Lee`s movie  ：《太极张三丰〉，you could see that Jet Lee （李连杰） practiced tai-ji coiling by stirring a big pot of water in circular motion until a column of water rising up as a column of water-twister ! (Note : Without the knowledge/practice  of coiling, tai-ji could not be applied for combat !)