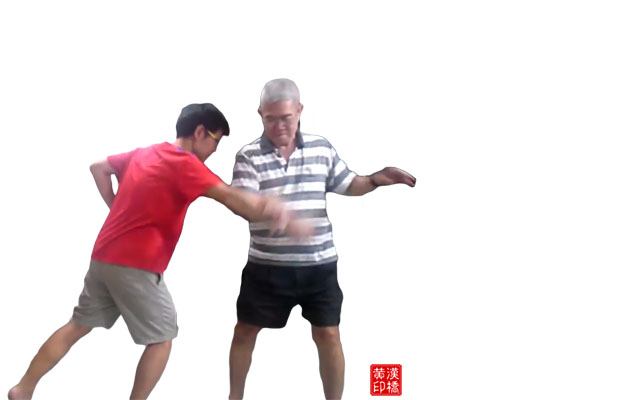 The application of Tai-ji : single whip ( 单鞭）can be found in many videos on the net and even in the picture of 杨澄甫`s  tai-ji-album. But I am not quite convinced that no action involved in the right hand hook-wrist (右勾腕) to be demonstrated. 甚至有人以为是 鹤 拳/ 鹤 咀。 Yang cheng fu `s picture only shows the final part of the action because there was no video, carton or movie at that time.

The first and second parts of the continuous action might be missing. So I think I have either to  ” recover/restore ” the original version or develop an innovation version for the tai-ji practitioners to refer !  In my video, the first part is the interception of the intruding dagger by my right hand, second part is the locking of the intruding arm by my wrist-coiling (i.e. looking like 勾 手 that you could see wrist-coiling in the movie : 笑太极). and press down in an anti-clockwise semi-circular locus (like a single whip flicking in a semi-U locus, this sudden flick in tai-ji is called <pluck : 採〉） so as to stir his body direction as well as to expose his right shoulder. (Note : this action must be faster so that I would be on his right-hand side before he could attack me with his left hand/leg !)

Third part is the striking on his right shoulder ( this action must be faster to make him unbalanced, otherwise he would attack me with his left hand/leg)  so as to bounce him away diagonally (as shown in the picture of Yang`s tai-ji album ! ) Note : the action of the 1st and  2nd part of single whip (described above) are  implicit parts which are also not shown in the tai-ji form/set.           近日（七，八月，2015）新闻中，惊闻在台北和北京，都有凶徒持刀 伤/杀 人事件，故旅游者除了要记得买旅游保险外，不妨上老夫的网站，学一两招：“ 空手对白刃 ” 的太极功夫，以防 万一  ，至少可以避开第一刀！