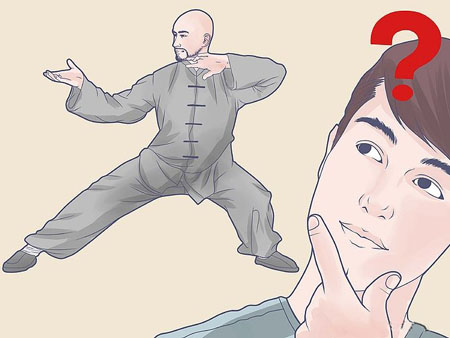 The dual functions of an English dictionary are firstly : to express the meaning of a strange word, secondly : to confirm the pronunciation of a strange word in terms of international phonetics as said by an English proverb : ” We could not judge a book by its cover ! “. Likewise, we could not judge the pronunciation by its spelling ! Likewise again, tai-ji has dual functions : firstly an unique martial art for self-defense, secondly : a dynamic “chi-gong” as known by layman as ” morning exercise ” !   But in practice, most of the common people recognize the second function instead of the first one because they simply do not believe that its soft and slow motion could be used for self-defense. Ironically this is the wisdom of the ancient tai-ji founder that they believed  in nature, the soft water could subdue the hard rock (i.e. rocks could be polished and rotten by water),. Unfortunately , the individual movements of combat tai-ji could not be connected smoothly and fluently like “chi (气）” flowing in human bodies ,  the compromise is to give up some technical aspects to suit the fluent movements without acute angles so called as the 108 old forms of  tai-ji. That is why even the tai-ji grand-master 《吴公议》did not  know how to apply his own tai-ji  skill to fight with 《陈克夫》in 1954. Please do not blame your selves if you had been KO-ed by a single punch by your opponents even you had practiced tai-ji for donkey years !