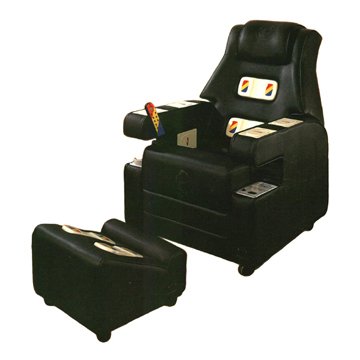 When human beings are going into old ages, the organs mostly to write off are the knee-joints and cartilages. It is because that the knee-joints and cartilages  are the  most frequently used to support our activities in our daily lives especially those people indulge in sports, marathon and hiking !  Even some of the outstanding national players give up their careers in their younger ages (i.e. early retirement) because of these shortcoming ! Although knee-joints and cartilages nowadays could be replaced by artificial ones but the outcomes/ performance are still far beyond expectation. Despite the above operation the immediate remedies are as follows (i) putting on ordinary kneecap-guard : this act could give too little help. (ii) putting on more advance infra-red knee-guard : this act is better than the previous one, but still far from expectation. (iii) taking medication which contains Glucosamine sulfate to stimulate the production of glycosamininoglycan to help maintain healthy joints and cartilages : this act is quite helpful in long runs. (iv) Using ultra-long magnetic waves （超长电磁波） to relieve pain and tiredness in hours depending on individual situation . At the same time to stimulate the soft tissue to recover in the joints and cartilages in near future. The magnetic wave therapy coincides with the principle of Chinese medication that 《 通则不痛 〉, meaning : < no blockage could cause no pain >, Magnetic waves could penetrate non-metallic substances such as blood vessels, veins and even bones. Therefore it could  magnetize the iron molecules ( originally scatter randomly)  in our blood cells to form magnetic di-poles which would match all in alignments (i.e. N-S-N-S …) with micro-vibrations. This micro-vibrations would clear the micro-obstacles or blockages on the  walls of the blood vessels during the matching to achieve : 《 通脉化瘀 〉！The ultra-long magnetic wave generator is called < dumb-doctor

（哑吧医生）〉which presents in 3 formats : (a) electro-magnetic chair (for whole body health care) (b) electro-magnetic sleeping-pad (for paralytic patients) (c) portable set (for partial treatments).  I use the portable set half an hour on my both knees to defy my old age every day so that I could maintain myself active in playing table tennis ! ). To own a portable set is rather costly (about $900 ). Some health-care centers might offer the magnetic therapy service say, $3 for half an  hour.