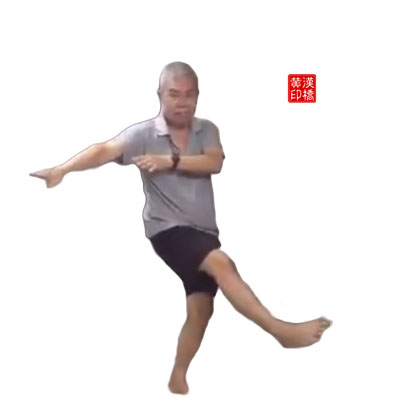 If you are attacked in the dark and you could not see clearly what type of movement is from the the attack. Then you have to act as a blind warrior (盲侠 ) to synchronize your evasion and counter attack by using the tai-ji movement : 弯弓射虎  as shown in the fight : Fang Bian vs Simon Marcus ! The advantage of this movement is that you shift  upper part of your body to the right (i.e. out of the central line even could skip the rapid multiple punches of Yip-Mun) then your left punch could break through your opponents central guard of any brutal charge and might even fracture his nose !   May I elaborate the solo as follows : < Preparation > both hands on guard, the central gravity falls on the left foot, then step (1) : slide your  right foot to the right corner diagonally and immediately launch your left punch forward (as if you are shooting an arrow up-hill).  Step (2) : Shift back upper part of your body to the original central position and launch your right punch forward (note : both feet are kept stationary !),  Step (3) : Low sweep with your right foot.   Note: In the movie : " Ip-Mun <3> " , Ip-Mun could not block Tayson`s fast and heavy multiple punches by Wing-choon`s fighting skill, if he could use this tai-ji movement : 弯弓射虎 (meaning : shoot an arrow up-hill to hunt the tiger), just evaded his body to the right with his left punch aiming on taysons nose (like Fang-Bian KO-ed Simon Marcus!). No matter how strong Tayson is, his nose is fragile and easily to be fractured even by a single punch ! On the other hand, Ip-Mun is not a smart fighter. He had forgotten the Chinese classical military strategy : " 不可力敌，只可智取！” because Tayson`s size is almost double of Ip-Mun. If ip-Mun used low-sweep could easily topple Tayson due to his higher center of gravity !