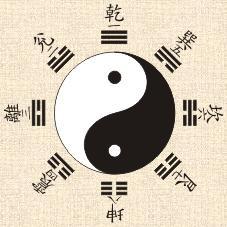 In Taiji, we do not encourage the use of brutal force to counter or go against the intruding force. If we could use comparatively  little force to change the direction of the coming force, this skill is called tai-ji neutralization. This is the core value of tai-ji. But unfortunately almost no demonstration involved in tai-ji coiling so far.  Let`s look at the logo of Tai-ji; the circumference of the circle symbolizes the circular movement of coiling (缠丝手，meaning : tangling or creeping hand )  for neutralization（化） . The action is similar to Wing-Chun`s sticky-hand / Chi Sao (粘手) or 醉拳中何仙姑之兰花手.

The black and white colors represent YIN (阴）and YANG（ 阳）in the universe that sun is Yang and noon is Yin. There is no puzzled or abstract  concept in Yin and Yang , in mathematics Yin,Yang means negative and positive. In medical science Yin,Yang means implicitness and explicitness. For example, the ” MERS ” virus which trespasses into human  body is Yin (i.e. no obvious symptom ) until 14 days later symptoms such as fever coming out, that is Yang ! In the action of tai-ji, our palms are always one facing upwards (Yin) and the other one facing downwards (yang) like holding a water-melon  !

There are 2 types of coiling manipulated by fore-arms and wrists  namely, inward and outward coiling. Their function is to fulfill the rule of tai-ji : “不丢不顶 ” meaning : do not go against at the same time do not lose contact. The typical example had shown in my video : ” outward-coiling & press ” in a slow-version so that beginners could watch clearly and practice with their partners. NB: the typical mode for tai-ji is —> neutralization (coiling) > counter attack.  In other words : tai-ji  is rather passive, i.e. not aggressive ! For self-defense purpose, you may practice one or two your favorable patterns/movements as tai-ji sanshou (太极散手）instead of practicing and memorizing the whole tai-ji form. Your effort probably would give you confidence walking in the dark alone !